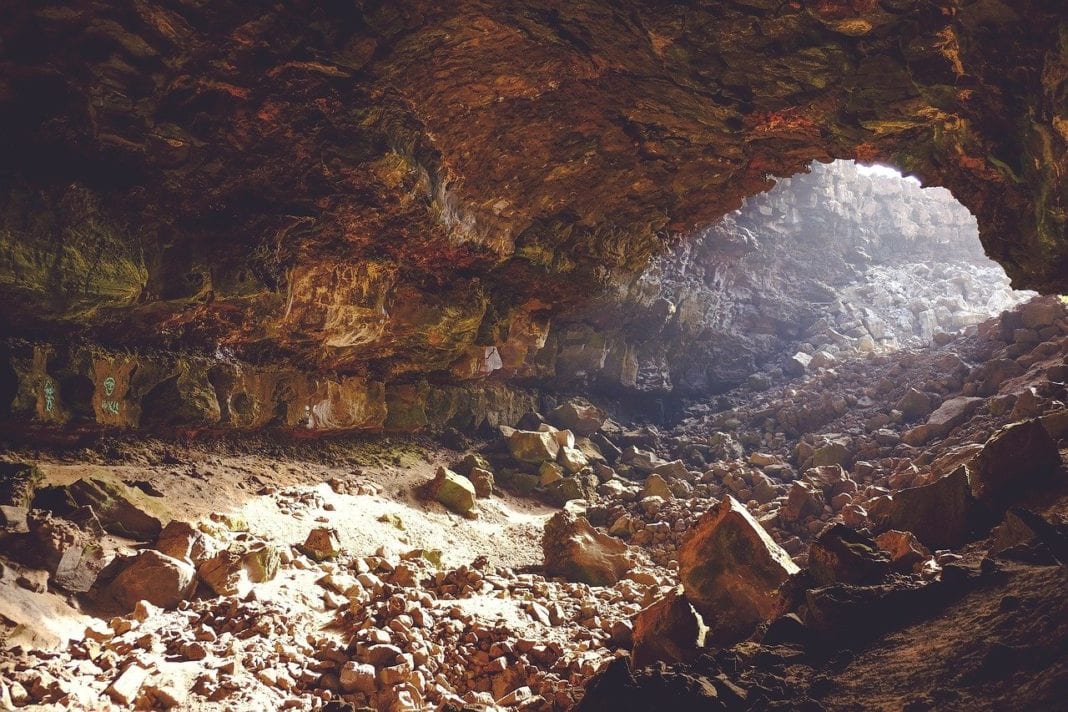 The reign of marvelous Caverns and Caves in Arkansas has long existed, and it distinguishes as the best tourist destination.

The naturally carved caverns from a rocky mountain or cavity in the ground have stuck out as the magnificent Caves in Arkansas. These caves have caught the eye of tourists and adventurous adherents for their lively and thrilling scenic landscape.

Arkansas, Ozark has hidden treasure locked underneath the ground and in the goofy embrace of the rocky-mountains.

Step into these caves to take a ride back to the ancient world.

The Mystic Caverns and Crystal Dome are settled amongst the cities of Jasper and Harrison of Arkansas. It attracts tourists all year round, except January when the caves flood with water.

The precise history of Mystic Caverns’ existence is unknown, but it can be traced back to the 1830s during that time when the region flowed with an abundant settlement.

Previously known as Mansion Caves later, in 1920 received official recognition as one of the best caves in Arkansas, and since then, it has been accepting enthusiast tourists.

For years, to make the caves convenient for visitors, the caves’ development took a steady pace. Along the way, in the mid-1960, a bulldozer accidentally hit the land hard, which led to the discovery of the beautiful Crystal Dome Cavern.

The Crystal Dome is somewhat 400 ft (120m) away from the Mystic Cavern, and hence they are often referred to as the Twin Caves.

The thick walls of the rocky caves withstand the temperature of 580 F throughout the year.

Arkansas pristine caves have left the visitors amazed with its white dripstones like calcite and other natural formations.

The mysterious cave located in Sulphur Springs, Arkansas, infamous as the Old Spanish Treasure, is endowed with limestone formations.

It conceals the secrets of the legend Conquistador that dates from before 350 years.

After discovering the Old Spanish Treasure cave, it was previously envisaged that the Spanish Conquistadors that traveled across the world hunting for riches sought refuge in the northwest Ozarks.

They stashed up the treasure in these caves as their body took the brunt of illness and malnutrition.

A Spaniard from Madrid, in 1885, assailed to the Old Spanish Treasure to unseal the secrets of the cave following the directions from some old maps. The search of the magnificent cave was not a victory.

With time, a good excavation led to the findings of various weapons, helmets, armor, and some gold coins.

Drought turned out to be a boon in discovering the buried rooms and other details hidden by the cave.

The treasure hunting off the cave stalled the public’s access to this ancient gem until the 1930s.

Six miles away from the east of Eureka spring resides the Onyx Cave that has received public recognition since 1893 and is considered the oldest cave in Arkansas.

These caves have only one opening for the visitors, and as a result, it’s the only way in and out.

Unlike its name, these caves in Arkansas don’t have onyx. Instead, they have sheetlike deposits of calcite known as the flowstone and hence the name Onyx Cave.

Tourists are provided with a pair of head-set as they make their way past the caves, and it gives them a guided tour of the chambers and detailed knowledge of the caves.

The oldest limestone caverns, top listed in the caves in Arkansas, is Bull Shoals Caverns, situated in the north-central of Arkansas.

As per the geologists, the Ordovician period was the time to form the magnificent structures, the caverns.

Caverns were carved out of the water as it flowed past the rocks’ cracks and nooks nearly 350 million years ago.

Human existence was detected in this cave from 300 B.C., which was traced through the carbon dating process, and later on, the Native Americans and tribes inhabited the space around 10,000 years back.

The gushing streams and glistening waterfall are graced in the Bull Shoals Caverns, projecting nature’s exceptional creation to the tourists.

The natural formation, namely the stalactites, stalagmites, flowstone, cave pearl, and many other formations, are found here.

Bull Shoals Caverns was admitted for public access, tourism in 1958.

Step on the hiking trails of Arkansas as the shore of the Beaver lake opens the door to the stunning entrance of the War Eagle Cavern that beats the uniqueness of any other caves in Arkansas.

Like the Eureka Springs, along the borders of Rogers, the largest cavern of Arkansas is stationed, which never fails to amaze the tourists with its spectacular beauty.

It is believed that Indians dwelled in these caves hundreds of years before the settlers came in. The caves were officialized as a tourist destination in 1978.

During the Great Depression, many families sought refuge in these caves due to the availability of freshwater.

War Eagle Caves offers two types of tours – a walking tour that whizzes past the seven feet tall Crystal Hallways and a spelunker tour that gets the visitor all wet and muddy through their adventurous ride past the cave.

The Harrison and Marshall cities of Arkansas embrace the mysterious but venturesome gem of a cave, the Hurricane River Cavern.

Concealed in the depths of the Ozark mountains, a few minutes away from Buffalo National River, this cavern sets up an amazing trip site to spend a great time with friends and family whilst enjoying the adventurous tours reserved for tourists.

The Hurricane Branch has turned out to be a center of attraction for its serpentine passageways to the underground aquifer, which have eroded and ends at Buffalo National River.

The East Passage, Deep North, and Mill Creek are the well-known extreme tours that keep the enthusiastic adventurers hopping from one challenge to another.

Open Hours: Opens Daily at 9:00 am from March to October.

Somewhat 2 miles away from Highway near Mountain View, Stone County locates one of Arkansas’s aesthetic caves.

The only Tourist Cave operated by the US Forest Service is the Blanchard Springs Caverns in the Ozark St. Francis National Forest.

Blanchard Springs Caverns has crystalline mineral deposits from the dripping water, which got transformed into flowstones, stalagmites, and stalactites, painting a spectacular picture of the cavern.

Exploring these caves in Arkansas turns out to be a fun experience of strolling past the lovely decorated chambers, climbing and crawling the rocky-mountains and the clay mud, the least developed part of the cavern.

The dripstone trail, the Living cave, discovery trails, and wild cave tours take you past the four walls of rocks and into history.

The most stunning and largest privately owned caves in Arkansas is the Cosmic Caverns of Berryville. The show cave, discovered in 1845, was developed and recognized as a tourist attraction in 1927.

Cave Popcorn, stalagmites, stalactites, and flowstone are commonly found in Arkansas caves. Still, the two glimmering lakes whose depths are left undiscovered appears to be an eye candy of the Cosmic Caverns.

The multitude of soda straw about 9 feet long is considered to be the longest formations in Ozark.

Ozark blind salamanders, the frequently seen living creatures of this cave, welcomes the tourists in the warm walls with its enduring temperatures of about 640F.

The Silent Splendor is a recently discovered attraction, and a trip to this gorgeous destination is a must if you are in Arkansas.

Lost Valley zigzags’ scenic trail through the spectacular creek, the rocky boulders leading up to the beautiful Eden falls, ends at the Cobb cave entrance.

After an eventful trail, exploring the dark depths of the Cobb Cave gives you an exciting experience.

It is believed that the Lost Valley previously was an underground cavern, and various natural processes have altered it into a long beautiful trail leaving behind the remnants in the form of Cobb Cave and a cave underground. As a result, it is listed in the caves in Arkansas.

Winters are the best with gushing waterfalls, but as summer makes its way, the Clark Creek tributary of Buffalo River goes dry; nevertheless, the hiking journey continues to be cheerful.

One of the caves’ natural wonders in Arkansas is three miles cavern away from Jasper County, infamous as Diamond Cave.

The stunning underground display of stalagmites, stalactites, and flowstone racing miles down the ceiling draws a lovely picture of the cave’s interior.

The discovery of this cave took place when Samuel, along with his teammate from Arkansas General Assembly, went hunting for a bear and followed his dog.

Diamond cave probably got its name from the crystal clear water which flowed through the roof, containing plenty of minerals that also gave out multi-colored glimmers of light.

This cave is labeled as the best cave in Arkansas for its brilliant mineral formation, unusual glistening colors, spacious chambers, and natural beauty.

Many corners of Diamond caves are left unexplored; thus, geologists are still discovering its treasure.

The Crystal Bridges Museum of American Art, founded by Alice Walton, is nestled between the lush green nature.

Variety of paintings and art worth millions of dollars were acquired from across the world by Walton.

This museum was inaugurated for the public in the year 2011. Whilst visiting the caves in Arkansas, a trip to this captivating museum is a must.

A halt at Throwncrown Capel, the majestic religious architecture of modern times, is a must on your way to the Onyx Cave of the Eureka Springs.

The 100 tons of native stones hold the 48 feet blend of wooden and glass structure that rises the Ozark sky’s heights.

The fascinating architecture by E.Fay Jones has received millions of visitors since its establishment in 1980.

Embraced in the Ouachita Mountains of Arkansas are the Garvan Woodland Gardens, best described as the blooming botanical gardens.

This blossoming garden of the University of Arkansas along-side the lofty mountains and upstanding pine trees reminds of the picturesque canopy.

The home of many big cat families, along with other wild species, is the Turpentine Creek Wildlife Refuge.

The 459 acres of area in Eureka Springs of Arkansas nurtures and shelters the native animals that have been neglected and abused.

Turpentine Creek is a non-profit sanctuary verified by the Global Federation of Animal Sanctuaries in 2015.

The 216 feet high Hot Springs Mountain Tower provides a magnificent view of the Ouachita Mountains, the Diamond Lake region, and many such places situated 140 miles away.

This observation tower was constructed thrice using lattice steel and later on became a tourist attraction in 1983.

Hot Springs Mountain Tower takes you on the highest peak displaying the wide beauty of Arkansas below.

Travel to the earth’s hidden grounds as you discover the mystical treasures of the caverns and caves in Arkansas.