Amazing Facts About The Hanauma Bay 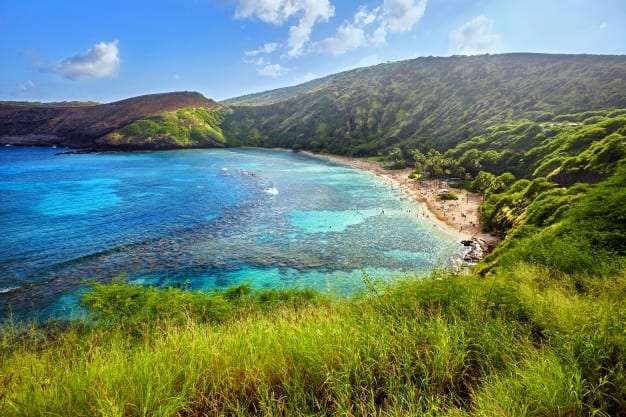 Top Christmas towns to put on your holiday bucket list

Want to enjoy pristine waters teeming with marine life, gorgeous stretches of white sand, and also have the best snorkeling experience? Then Hanauma bay is the best place for you.

Located in Oahu, Hanauma bay is one of the most popular tourist destinations on the Hawaiian island.

Did you know that it accommodated more than 3 million visitors per year at one point in time? Such was Hanauma bay’s popularity that it needed to be shut down to restore the marine ecosystem that suffered tremendously due to overexploitation and heavy tourist flow.

Are you also feeling intrigued and want to know more? Then, continue reading the article as we share everything you need to know before going to Hanauma bay.

A Detailed Guide On Hanauma Bay

A. About the Hanauma Bay

Hanauma Bay is located on the southeast coast of the island of Oahu in the Hawaii Kai neighborhood. The neighborhood is present in the county of Honolulu on the Hawaiian island.

The prefix Hana in the name refers to ‘bay’ in the Hawaiian language, and Uma means curve. Therefore the possible translation of the name could be a curved bay.

Hanauma is a nature preserve as well as a marine life conservation district; therefore, the name Hanauma bay beach got changed over time and was replaced by the name of Hanauma Bay Nature Preserve. A marine education center was opened to educate people about the rich marine ecosystem of the bay.

The bay was formed when strong ocean currents had broken the seaward side of a volcanic crater and flooded the crater floor.

As the years passed by, with the strong erosive forces of the oceanic currents, the seaward cater wall entirely collapsed, and a white sand beach and a huge reef formed instead.

Also, did you know the oldest coral found in the bay is 7000 years old? The coral reef present in the beach is extended 300 meters offshore to prevent the big oceanic waves from reaching the beach.

B. What can you do in Hanauma Bay?

The grand and exquisite Hanauma bay is famous for its snorkeling experience, which is accompanied by crystal clear water and rich marine life. People come from far and wide to experience the spectacular marine life that this bay provides.

The experience of swimming underwater, according to the tourists, is like swimming in an aquarium. It is filled with colorful and rare fishes and exquisite coral reefs.

When the sunlight hits the coral reefs, the reefs then shine in all colors ranging from pink to yellow and black.

The bay is teeming with flora and fauna of all kinds. Did you know that the bay is home to more than 450 species of tropical fish? You can witness fishes like Reef triggerfish, butterflyfish, squirrelfish, and many more. Also, do you know the bay is famous for green sea turtles?

During your snorkeling experience, you will observe the fishes swimming up to the reef, and since they are not afraid of human interaction, you can also find some of them directly swimming up to you.

One of the most thrilling experiences that can be part of your trip to Hanauma bay is night diving in the bay. Rent a waterproof flashlight, dive underwater, and enjoy the breathtaking sceneries that the ocean provides.

It is said that different fishes come out during the night, and if you are lucky enough, you can also see an octopus swimming beside you.

C. Tips and measures to keep in mind

As already mentioned, being one of the most popular spots for snorkeling, the island has suffered tremendous overuse from humans over the years. And these had led to the hampering of the marine ecosystem.

So in order to restore the fragile ecosystem, the authorities decided to enforce a strict set of rules of regulations, and these preventive measures should be kept in mind, especially if you are planning for a trip to Hanauma bay.

These tips apply for both snorkeling or in general.

Hanauma bay is a place where people come to enjoy themselves in the water and have fun. However, with that being said, make sure to follow all the guidelines and safety tips provided by the authorities. There are several drowning cases reported every year in the bay.

There have been many instances where inexperienced swimmers have underestimated ocean currents’ power and have succumbed to their death.

If you are a novice at snorkeling or if it is your first time in the bay, stay close to the shore. Also, do not forget to go snorkeling with a partner or alone but never alone.

Another thing that you should be cautious of in the bay is the coral reefs. The coral reefs are sharp, and they can cause severe infections if they come in contact with humans. If you get cut by the reef, then wash the infected area with mild soap and fresh water and immediately apply first aid to the affected area.

Make sure there are no pieces of coral or microbes present in the wound. Also, apply an antibiotic ointment for better protection.

The park was closed due to the Covid pandemic. After that, when it opened, there were certain rules tweaked for safety reasons. Those are

Now there you go, everything you need to know about Hanauma bay. With its exquisite white sands, rich marine life, and thrilling snorkeling experience, we are sure that you will be elated upon visiting the bay.

7 Interesting Things To Do In Orange Beach Alabama

Top Christmas towns to put on your holiday bucket list

8 Food that helps you with your workout